This is how to judge

A runner will give you a scrambled cube inside a box. The cover is for the competitor not to be able to see the cube or the scramble. Together with the cube, you will find a scorecard to be filled in with times. Take out the scorecard and place the cube on the mat with the cover on top. Click reset on the timer and make sure it shows 0.00.

When the cube is solved and the competitor has stopped the time, you write down the time on the piece of paper and then sign it with your initials. If the solution is to be penalized by +2 seconds, write in this format: 32.17 +2 = 34.17. If the solve is disqualified, write DNF (did not finish).

Make sure the competitor reviews, agrees and signs the time written down as well. After this, the competitor goes back to the waiting area. You hold the cover with the cube and acorecard up in the air so that a runner can see it. When the runner has collected these, you remain seated and wait for the next competitor. Repeat until the entire round is finished. 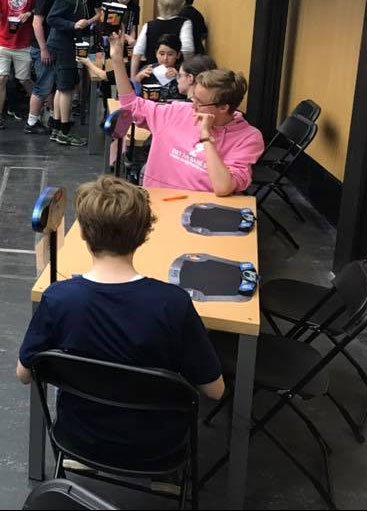 How does the stopwatch work?

The stopwatches may look a little different, but they are very simple. On the left you have a reset button that removes the old time and resets it to zero. On the right you have a start/stop button. Click the right button once to start the timer, then click it again to stop the timer. Click the left button to reset it before the next attempt.

How does the timer work?

The timer should already be on when you arrive at the station. If not, start the timer using the On/Off button. Click the Reset button to delete the old time and reset it to zero. The competitor places their fingertips on the blue pressure plates with yellow markings. When the lamp lights up green (after approximately half a second of pressure on the plates), the timer can be released and the time starts ticking. When the cube is solved, the competitor puts their fingers back on the tiles to stop time. Write down the time and make sure both have reviewed and signed the time before clicking the reset button again for the next competitor.

If the attempt failed, write “DNF” (did not finish).

During the attempt
The competitor may not speak to anyone other than the judge or a delegate. Outside help means disqualification (DNF).
If the cube gets popped or corner twisted, the competitor gets to put back/turn the pieces back to the same position as before.

After the attempt
The timer must be stopped with the palms facing down and with the fingers on the sensors.
The cube must not be touched.
If the cube is one move away from being solved, the solution is valid, but a penalty of +2 seconds is awarded.
If the cube is two moves away from being solved then the solution is not valid. (DNF)
If all layers are not correctly aligned with each other: If one layer is less than 45 degrees off, the cube is counted as solved. If the layer is more than 45 degrees off, it counts as a move away from solved (+2 penalty). If the layer is exactly at 45 degrees off and you don’t know how to judge it, you contact a delegate who acts as chief judge. Make sure no one touches the cube, it should remain on the table.

If you are unsure
Contact the delegate of the competition.

⟵ Back to more Speedcubing